After a few decades, due to the economic constraints, and the fact that China domestic production did not have the equipment and rolling technology, there was no sheet piling production in China.
In 20th century, China's steel industry increased very fast, mills imported new rolling production line from Japan and Korea, sheet pile manufacturer produced 500 tons of type III profiles and these products were successfully applied in the Nen River Bridge cofferdam, Jingjiang New Century Shipbuilding plant 300,000 tons dock, and also exported to Bangladesh for flood control projects and other projects.

After the trial production, due to the low production efficiency and less domestic demand and also lack of technical experience and other reasons, hot rolled sheet piles did not continue to produce. According to statistics, China's annual consumption of hot rolled U type sheet piles remain at around 300,000 tons, accounting for 10 % of the world, and only limited to a few ports, docks, shipyards and bridge construction projects and other permanent cofferdam, excavation and other temporary works.

In recent years, with the rapid development of China's economy, all kinds of new, efficient and environmentally friendly construction techniques and materials gradually are popularized. Because of its high-strength, lightweight, good sealing, good durability, high construction efficiency, small footprint, large-scale construction projects all started to use the Panels. Major projects such as the Shanghai Changxing Shipbuilding Base project, Caofeidian Coal Terminal, etc. In addition, the foundation pit, retaining cofferdam, wharf construction and some other projects, such as the second phase of the Pudong International Airport, Shanghai World Expo project, the Hangzhou Bay Bridge also needed a large amount of steel sheet pile.
But generally speaking, China's steel sheet pile technology is still in its infancy,The current annual consumption of steel sheet pile is about 30,000 tons, thus the production and application of hot rolled sheet piles is still a long way to go for all sheet pile manufacturers in China 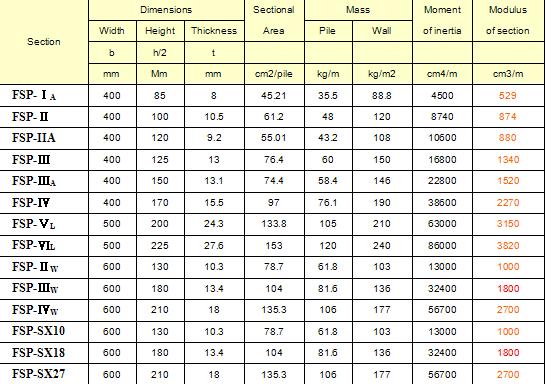