The parallel flanges channel have thinner material thicknesses but on the other hand slightly wider flanges than the UPN profiles. UPE channels, normalized by the DIN 1026-2 standard, correspond to a large extent with UNP channels, normalized by DIN 1026, however, they have widened and parallel flanges. The channel steel series with parallel flanges is now also available in stainless steel and is a very interesting alternative to the UPN series.Possibility of manufacturing steel channel girders transferring loads in Y-axis
UPE parallel flanges channels have with reduced weight, better static values in relation to UNP channels which is reflected in higher, related to the weight, section modulus at bending - Wy/G and Wz/G.Furthermore the new UPE series match perfectly with the dimensions of the IPE series according to EN Standard.Joining simplification when welding, screwing together and riveting thanks to eliminating adapting elements and required washers.

UPE channel is the short form for channel sections with parallel flanges according to DIN 1026-2: 2009-10 with tolerances according to EN 10279: 2000.The series of types of UPE is characterized by much better advantages with reference to UAP channels, normalized by the NF A 45-255 French standard.Therefore using UPE profiles results in weight saving up to 30% by keeping the same static conditions.Due to the characteristic of the UPE steel channel, architects and engineers are able to reduce weight by 9% when calculating around the strong axis and even 24% when referring to the weaker axis.Better abilities to join with girders with parallel flanges (HE and IPE). 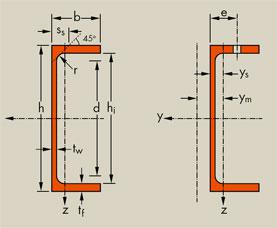