Universal sections are the most often used section for structural steel purposes. Also known as an H-Section beam, the Universal Column’s vertical side resists the sheer force exerted upon it, while the flanges help the beam resist the load’s pressure, which would otherwise cause it to bend.The loads carried by a universal column are transferred to columns, walls, or girders, which then transfer the force to adjacent structural compression members.They are distinguished by their profile, the shope of their cross-section, the length and the grade.You may find two numbers before the Universal section, eg. 152 x 152 UC 23, however in most cases one of them is omitted as they are both the same. For example, 152x152x30, would be 152mm in height, 152mm in width and 30KG per meter of length.

Unlike a universal beam, the UC’s width is roughly equal to their depth.The height of a Universal Column is always the same as its width, making it more suited to being used vertically and supporting loads such as columns in multi-storey constructions.Beams generally carry vertical gravitational forces but can also be used to carry horizontal loads.Due to their section shape, they are often called “I-sections” or “H-sections”. UC universal columns are mainly used for columns, however their small depth compared to universal beams make them ideal load bearing members when height is limited (which is quite often the case in residential projects).

The cross-sections are commonly specified with a code consisting of the dimension.We can supply a range of Universal columns like EN, BS, ASTM and JIS.A beam is a structural element that is capable of withstanding loads primarily by resisting bending.Traditional usage includes foundation for buildings and civil projects, but smaller structures such as truck or automobile frames, machine frames, and other mechanical or structural systems contain beams.The UC’s parallel flange does away with the need for tapered washers, and makes it easier to connect than the flanges of Rolled Steel Joists (RSJ), which vary in thickness. For example, a 152 UC 23 is 152 mm wide and 152 mm deep is universal section. The last number (23 in this example) is the weight per metre in kilograms 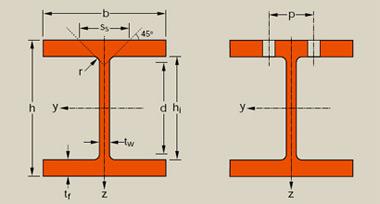